The remarkably efficient sappers of 24 Construction Squadron established the Pandewan camp in Sabah in 1965. It was just to the north of the village of the same name, along the route of the road started by 7 Field squadron a year before.  They built that camp more or less in their spare time while they cut the road into and over the mountains of the Witti Range and down the other side, carved out an airstrip and performed sundry other sapperly feats, all being part of Operation Granite, the RAE’s contribution to the British Commonwealth’s support of the fledgling Federation of Malaysia in the face of the hostile Indonesian “Konfrontasi”.  Pandewan camp was occupied in succession by 21 Construction and 22 Construction throughout 1966. 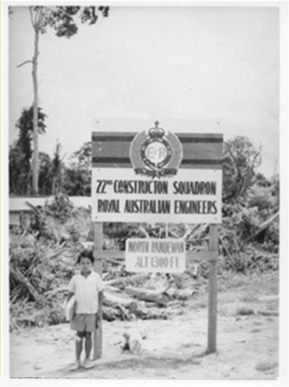 Each weekday the Murut children from the local kampong would traipse past the camp to and from the school in the village – and on Saturdays too, if memory serves.  Bright as could be, in their neat school uniforms, they no doubt reminded many of the Australians of their own children and nephews and nieces back home.  They were terribly shy but inevitably some of the more inquisitive and venturesome would pause and chat on their way past and chief of these was Pilin, a boy of some six or seven years.  How come that kid was not spoiled rotten with attention and little presents is a wonder; he became the virtual camp mascot.  Then, during 22 Construction’s tour, Confrontation ended and within months the squadron withdrew, leaving behind an unfinished road, their red British-issue t-shirts (PT, for the use of, but not often) which the local people apparently had secretly coveted all the while – and memories.

Pursuing those memories in 2004 were ex-22 Construction members Laurie Nelms, John Lehmann and Rod Bramich.  Many changes have taken place in the Sabahan interior in the name of progress.  The jungle is gone, replaced by oil palm plantations and only traces of the old road remain by the side of a modern paved highway.  But the towns and villages are still there.  At Pandewan village, the Orang Tua (headman) recognised the photograph of Pilin - now Corporal Pilin Talong, a watch commander at the Nabawan Police Post, back down the road.  A reunion quickly ensued back in Nabawan and Pilin was overjoyed when he realised who his visitors were, with happy though enigmatic recollections exchanged in their respective languages.  The ribbons of the Pingat Perkhidmatan Setia (Federation Loyal Service Medal) and the Pingat Perkhidmatan Am (General Service Medal) on his uniform marked a man dedicated to the service of his people. 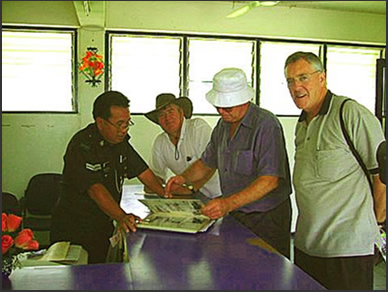 From there on it should have been a fairy-tale ending, with further visits planned in future years and increasing numbers of former Pandewan camp residents and transients (now mostly retired from their work and businesses) dropping by to pay their respects as word quickly passed around back in Australia.  But it was not to be.  On Friday 2 September 2005 Pilin and his colleague, Corporal Husin Abdul Rahman, were attacked in Pandewan by an amok Manais Rangsaring, a man they had gone to calm.  Armed with a parang he killed Pilin and seriously injured Husin.  The officers were heavily armed with Colt AR-15 (M16) and H&K MP5 automatic weapons but, evidently out of compassion and concern for the man’s dignity which they sought to restore and with the greatest personal courage, they left their firearms aside when they confronted him.

A sense of desolation swept through those in Australia who had known Pilin as these events became known.  So recently “found”, then lost forever.  How much worse for his family and particularly his widow, Heslen Akon, herself a Pandewan girl.  Rest in peace Pilin, you were remembered with fondness before and with the greatest respect now.